From Dubai the border to Oman is a relatively short drive in various directions, and to the Sha’am border in the northern tip of Oman it takes about two hours. The drive is easy and smooth, and there is a whole bunch of seemingly unending desert to stare aimlessly into on the way. The drive takes you through the cities of Sharjah, Umm al Quwain and eventually Ras Al-Khaimah. The area of Oman in the North is separated from the rest of the country that rests below the UAE and juts into the Strait of Hormuz. This part of Oman also happens to be home to sweeping views, endless coastal roads, islands sporting hidden coves, and the most beautiful clear waters, full of a multitude of marine life.

To someone who’s never been to the Emirates and Oman, it might sound safe to assume that they are the somewhat the same, perhaps simply both wealthy countries with a lot of sand and mosques. However, once you cross the border from the UAE to Oman, you can feel a tangible change. There is a culture and reality that many places in the Emirates seem to lack; that genuine atmosphere, free of the hotels, malls, huge highways, artificially placed vegetation, and tourist traps. And I found that this genuine character, this soul, is so incredibly perceptible in contrast with life the Emirates.

After passing the border into Oman, on the way to Khasab Port at the Northernmost point, I found myself driving along the most beautiful coastal road I’ve ever seen. There is nothing better than open, empty stretches of road separating the cliffs you’re clinging to and the clear blue of the sea and sky. The road was smooth and winding and getting to the destination was almost as fun as the destination itself. Along the way to Khasab, we passed small towns, and although the Emirates also has small towns, these towns felt different. The sand is the same, and the buildings are that familiar off-white color, but the people are locals, which you don’t see so much in the Emirates if you’re living in a city like Dubai, and the locals are wonderful. Driving through small towns on the way we saw the old men sitting in front of the shops, the women buying their groceries at the markets, and the kids playing in the streets in worn out sandals. You don’t see these sorts of things in Dubai. On the way we saw broken down shops and rusty old cars, with tired but happy looking owners. These may be the things you’d expect to see in many places in the Middle East, and yet if you’re living in Dubai or Abu Dhabi, you never will. So while this atmosphere and the scenery likely isn’t unique to Oman, it was refreshing nonetheless to me, having come from the UAE.

When we arrived to the port, we hired a small dhow, one of the traditional Omani boats, and set off from the mainland. We cruised through the rocky islands off the coast, in and around the pale cliffs that jut up from the waters’ edge. While many of the islands look scarce, showing off an unforgiving wall of rock to those passing by, they hide within them countless coves and beautiful private beaches. Around the coast the water is clear and teaming with colorful marine life, perfect for snorkeling and diving; we saw hundreds of brightly colored fish, several dolphins, and various other marine animals. We saw only one other group of people during the day, and only briefly at that. I always find being out on the water calming and solitary, but gliding between the tall whitewashed bluffs, the silence only broken by our own voices and the sound of our boat, there was a profound calm that settled over us.

We spent the day snorkeling in the open water and relaxing at a quiet empty beach where our dhow captain left us, and watched the sun set from our seats around the fire we’d made on the beach. There was nobody else around, and when the dhow left us, we weren’t even sure when he’d be back. We simply enjoyed the peace and quiet, away from our busy lives in Dubai; watching the waves hit the shore, the birds flying overhead, and the sun setting behind the hills. I can’t suggest this easy getaway enough for people wanting to escape from their busy schedule in the UAE. Everything about the trip was relaxing and fun, from the drive through the desert and coastal roads, to watching the sun set from our own private beach. Whether you’ve already experienced Oman and are interested in seeing some more of this beautiful country, or you’re living somewhere in the UAE and need a break from the empty desert and of the UAE, heading north to this area of Oman will definitely be worth it. The landscape, the people and the sea will leave you feeling refreshed and enriched. 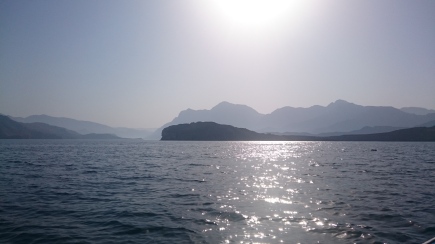 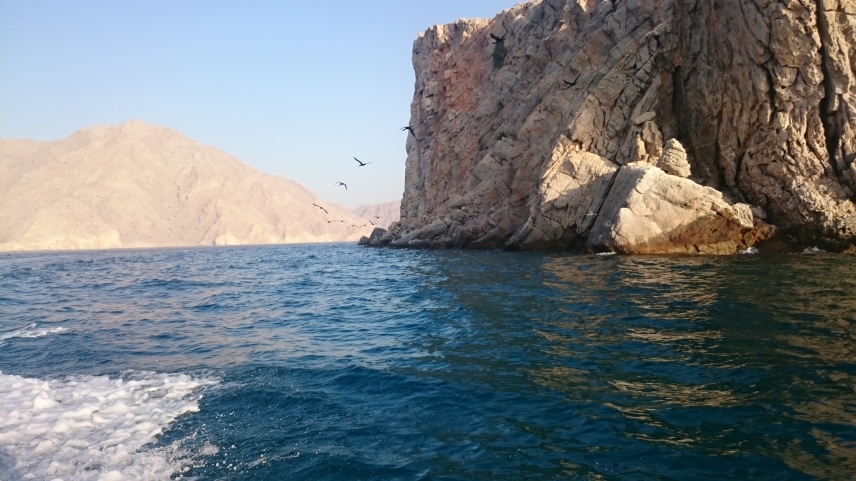