This past week we had a long weekend here in Taipei and decided to head out of Taiwan for the break. We chose Kuala Lumpur because it was a relatively cheap flight and we figured it was somewhere we could do in a weekend. There are some cities that you can go to for a weekend and see most of the sights in just a few days, and this was how we figured KL would be. On the one hand, we were right, because Kuala Lumpur did make for a great weekend trip, but I now know that there is so much more to see. So a weekend was enough to see the top sights, but now I feel like I need to head back and see more, do more, and definitely eat more!

When we arrived early on Thursday morning after a somewhat exhausting overnight flight, we were greeted with a beautiful, sunny, hot and humid day. On the way into town from the airport I was struck by how different it looked from Taiwan. It just felt so much more tropical, which is strange, considering Taiwan is also really green and lush. Perhaps it was the type of foliage, or the heat, but regardless, we already felt like we were on vacation. Another thing we noticed was that the houses and buildings in Kuala Lumpur felt cleaner and newer than in Taipei, which tends to look a little run down in areas. In Kuala Lumpur everything looked so bright and shiny in comparison.

We checked into our Airbnb, which happened to be in a beautiful new complex of buildings which seemed to be a mix of hotel and apartments. We were not disappointed. For less than $200 CAD we had a clean, spacious room with a balcony, and access to a rooftop pool, bar and restaurant for 3 nights. It was incredible; I don’t think I’ve ever had such value for my money when booking accommodations. I had my doubts, thinking there would be a catch, but when we got there it was just like it had in the photos. Honestly, the view was even better from the pool than we’d thought it would be. 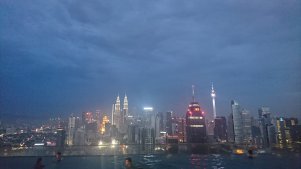 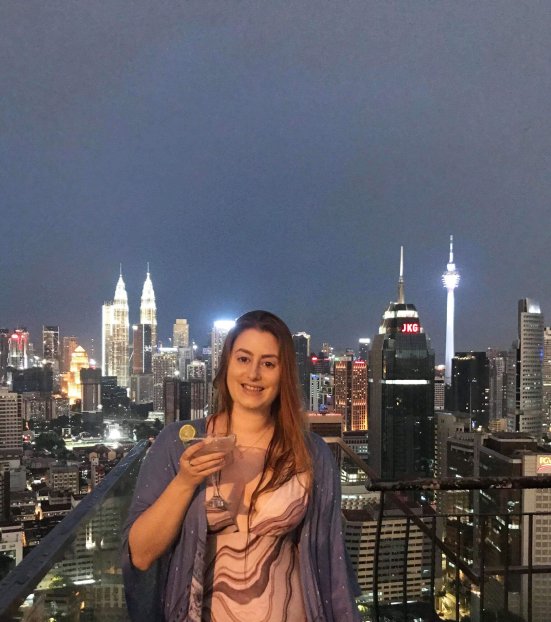 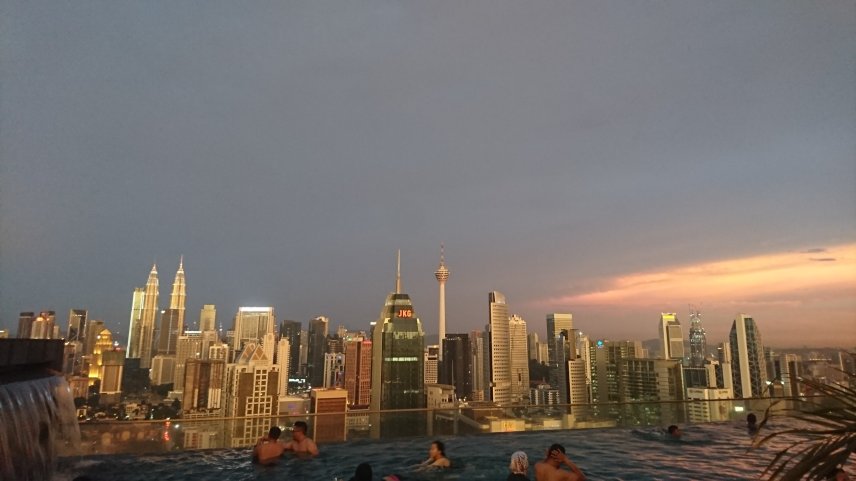 Over the course of the next few days we managed to get in most of the sightseeing, swimming, eating and drinking that we had planned to do! Before going we really didn’t have much of an itinerary, aside from one day trip on the Friday, so we wouldn’t be too busy. We were sure we wanted to see Batu Caves, and make it up one of the tall towers in the city (of which there are many), and we wanted to try a bunch of the local foods. Aside from those things though, we left our weekend pretty open, not wanting to be stressed out and rushing around.

For a great view of the Patronus Towers, we decided to head up KL Tower, which is the 7th tallest freestanding tower in the world (which I’ve now just googled to be sure). For about $30 CAD you can head up the tower to the Sky Deck, and even get a photo in the sky box, which is a little glass box jutting out over the city. It was a gorgeous day and you could see the Patronus Towers clearly, against the backdrop of the lush green hills that surround the city. Honestly, this was one of the best views I’ve ever had (followed closely by the many other views of the city we experienced later this weekend).

For our one planned day, we had booked an excursion through Airbnb. Along with another couple, we spent the day visiting waterfalls and Batu Caves. The waterfalls were definitely a must; after a short trek through the jungle we had a chance to swim at two different waterfalls. They were beautiful and secluded, and we had the afternoon to ourselves in the water. We got fish pedicures from the little fish in the pools under the waterfalls and did some cliff jumping. The water was clear and clean and so nice after a walking through the forest in the heat.

After our jungle trekking and waterfall visits our guide dropped us at Batu Caves. Batu Caves are a pretty iconic site in KL, and for good reason. They are massive limestone caverns perched atop a long rainbow staircase behind a massive golden statue of the Hindu god of war, Lord Murugan. There are so many colors all around the site, on the temples and shrines, and various other buildings and statues, and of course, all the way up the stairs. This is something I love about Hindu temples – they always look so colorful and vibrant. The cave complex is host to several temples and shrines. After making it up the 272 steps, you will step into the biggest one, known as Cathedral Cave or Temple Cave. From there, there are more stairs to another carvern which is open at the top, letting in the light, and some fresh air. There are other temples in smaller caves scattered around the complex, with their own colorful statues. The main temples in the big caverns were painted in bright colors, complete with neon lights and lively music. The caves were full of monkeys playing, looking for tourists with food, and climbing in and around the temples. I love monkeys – but I definitely don’t trust them; so I kept my bag close and my sunglasses hidden. There were also lots of pidgeons, some chickens and the occasional rat. So overall, there was lots going on in the caves, and it was definitely worth the walk up those stairs! 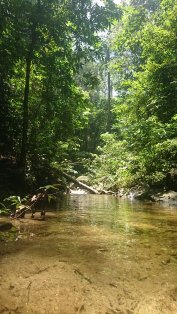 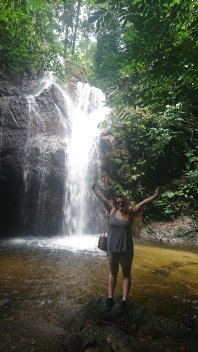 For food we tried local buffet food, street food and some of the more expensive local restaurants and loved them all. Personally, I love street food and night markets, so this was on my list of the things I wanted to do in KL. We went to Jalan Alor, which is a big night market downtown in the bustling center of Bukit Bintang. We ordered way too much food, and loved everything. We got satay, lemon chicken, sweet and sour chicken, veggie dishes I don’t know the names of, and of course lots of Malaysian beer.

One of my highlights was the Heli Lounge. This is exactly what it sounds like; a bar on top of a helipad. At about 40 floors up, the bar offered great views of the city. It is located pretty close to the Patronus towers and KL Tower. And the best part? No railings! Well, I guess it isn’t good for people scared of heights; but I loved the novelty of it, and the fact that there is nothing to obstruct the views. There were no railings or glass, or anything. It was literally just a helipad with a bunch of tables and chairs, and excellent service. I’ve never had such good views with a drink in hand. 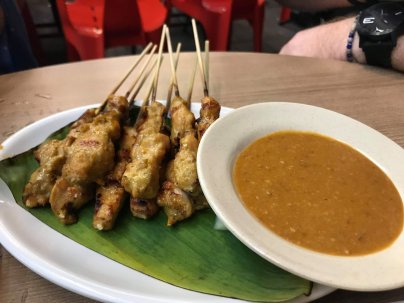 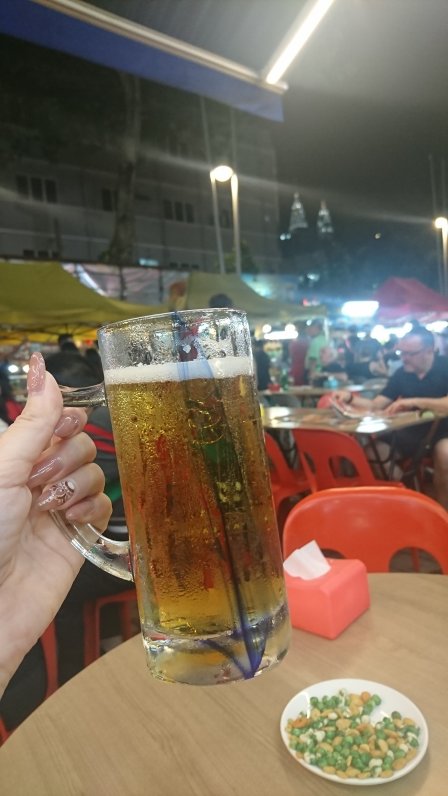 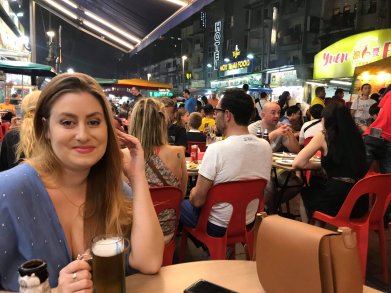 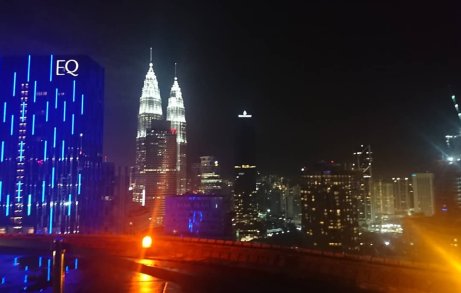 We also made it to the Perdana Botanical Gardens during the trip, and had a chance to see some birds. The KL Bird Park is (according to google) the largest free-flight walk-in aviary in the world. There were all sorts of birds just roaming around, and many more in eclosures. We fed some parrots and just wandered through, checking out the different kinds of birds, many of which I’d never seen before. Along with the bird park, there are many other things to see in Perdana Botanical Gardens, such as the Butterfly Park, National Monument, Deer Park, Orchid Gardens, and Planetarium. Also close by is the National Mosque, called the Masjid Negara, which is a beautiful mosque with a unique looking roof, reminiscent of a big blue umbrella opening. Since my visit I have learned that there are 18 points on the roof, 13 to represent the 13 states in Malaysia and the other 5 to represent the pillars of Islam. In any case, the there is lots to see at the Perdana Botanical Garden complex and it is definitely worth a visit, if you can manage wandering through in the heat.

These things were the highlights of the trip, but we had many in between moments as well that made the trip one of the best. Not only were the sights incredible, but the people we met all over the city were so friendly. From taxi drivers, to wait staff to just random people walking by, all the Malaysians we met were genuine and pleasant and happy to help. After this long weekend, I would definitely recommend Kuala Lumpur to anyone; for just a few days or for a longer trip around Malaysia, I’m sure it would be well worth it. Overall, we found that you get a lot for your money when it comes to accomodation, there is no end to the gorgeous sky high views, and the food is to die for. I can’t wait to check out more of Malaysia on the next visit! 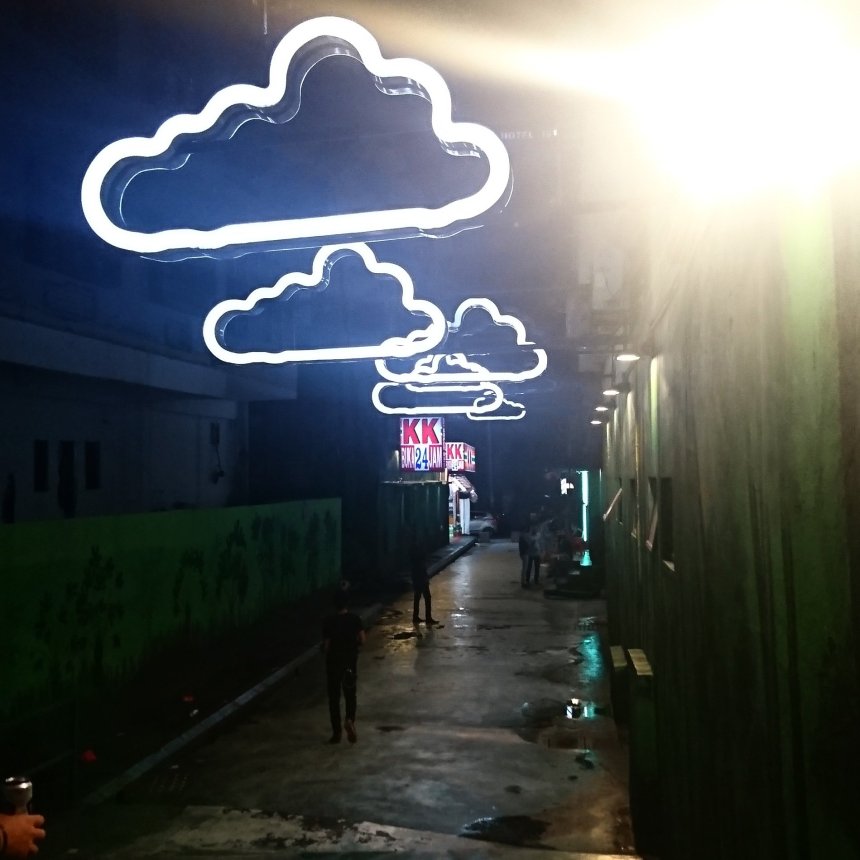 3 replies to A Long Weekend in Kuala Lumpur