It was Valentines Day the day I went to Mostar, and it was likely the best Valentines Day I’ve had in years, despite the lack of flowers and chocolate. In Sarajevo it was snowing and cold that day, and for a moment I considered not going to Mostar, thinking that it might be miserable and cold too. Nonetheless, we decided to go to Mostar, seeing that the weather forecast was calling for a sunnier day there than it would be in Sarajevo. Despite it being a long and exhausting day, I’m so glad I made it down to Mostar during my short stay in Bosnia Herzegovina; now able to say that I’ve been to both Bosnia and Herzegovina, which is the geographical region in which Mostar sits.

The drive to Mostar was probably just as spectacular as Mostar itself. I’m not one for sitting on buses usually, and because I can never sleep on them, I usually pass the hours by reading. On the way to Mostar though, I spent the majority of the trip there staring out the window at the landscape around us. Herzegovina is the southern portion of the country, and boasts a mountainous karst landscape, covered in dense forests. We drove through mountains and valleys, and past lakes and rivers that took my breath away. The mountains in the winter were stunning, snow covered peaks like the ones we have back home in my province of British Columbia. They were huge and majestic and we passed through and around them on winding roads high above the valleys below. Once we got closer to Mostar the landscape began looking warmer, snow and ice giving way to green grass and the feeling of spring approaching. The lakes and rivers that we passed on the way were bright hues of blue and turquoise, and looked so pristine and fresh in comparison with the dull grey or brown of so many rivers in the winter. The Neretva River was one of these bright turqoise rivers that winds it’s way through the mountains and forests. It is this river that Mostar is built on, named Mostar after the word ‘Mostari,’ which means bridge keepers. Back in the 1500’s, the bridge Stari Most was constructed by the Ottomans, and remained the only bridge in the area, for the purpose of collecting tolls from merchants passing through. The rest of the city grew up around the bridge, which then became a symbol of Mostar and at the time was an architectural wonder. 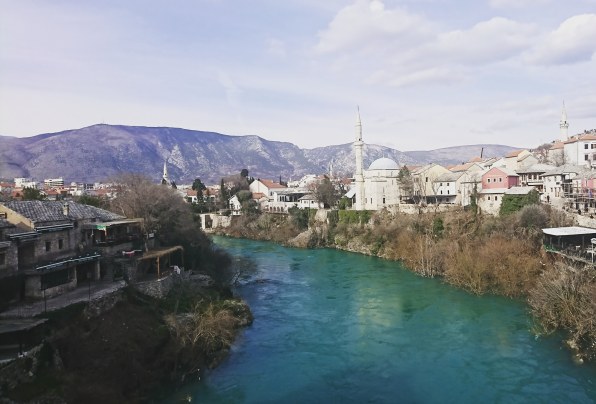 Mostar, or perhaps Herzegovina as a whole, is also culturally different in the sense that there is a higher population of Croats here. Bosnia Herzegovina has three distinct ethnic groups within it; the Croats, the Bosniaks and the Serbs. These different terms here are also a way of denoting religion; the Croats being Catholic, the Bosniaks Muslim and the Serbs Orthodox. I was told that if you ask a person from Bosnia Herzegovina where they are from, they will tell you they are a Croat if they are Catholic and Bosniak if they are Muslim, as opposed to simply referring to the country of their birth by saying they’re Bosnian. This ethnic and religious division apparently makes many things quite difficult at times, especially in politics, and has of course been quite volatile in the past. However, the different ethnicities live alongside one another again, and there are many mixed families. In any case, these demographics made Mostar different than Sarajevo, which consists of a mostly Bosniak population. For instance, we noticed that many foods in the menus were more like that of Croatia, and that the spellings of various things were more Croatian than Bosnian.

When we arrived in Mostar we made our way from the bus station to the Old Town. Throughout the city you can see remnants of the battles that took place here as well, between the Croats and the Bosniaks. There are burned out buildings or buildings with craters left in them from mortars, and spray painted messages telling visitors to remember. However, once we got into the Old Town, we were transported from a city remembering war to the cobble stoned streets of the Ottoman times. The little shops lining the streets reminded me of the bazaars in Turkey, and the old mosques with their minarets reaching tall above the buildings made me feel warm and nostalgic. It was quieter and calmer than Sarajevo, and there were less people on the streets, and in the restaurants (although I’m sure it’s much busier in warmer times). I had been reminded of Turkey in Sarajevo, and Mostar was yet another reminder. The winding little streets in the Old Town reminded me of a place outside of Izmir in Turkey, called Şirince. I had found Şirince peaceful and quaint and that’s exactly the feeling I had in Mostar. Sitting on a terrace over the river with a glass of wine and a view of the old bridge, Stari Most, was the most calm and content I’ve felt in a very long while.

There are parts of Mostar that are like stepping into a fairytale, and the natural beauty coupled with the traditional old architecture makes for a very unique and charming place. I am so glad I made my way to Mostar, despite the cold and the snow back in Sarajevo that had almost put me off making the trip. I honestly can’t think of a better way to have spent my Valentines Day this year, than by wandering through this stunning city. I’m not only glad that I had the chance to see Mostar, but that I managed to see some of the countryside and Herzegovina region on my short trip to Bosnia Herzegovina. I know I will visit Mostar again, and I can’t wait to see more of this beautiful city in the spring or the summer, when everything is green and alive.