They used to call it ‘Little Paris,’ and while you’re walking through the streets of the Old Town, you can see why this nickname is so appropriate. Wandering through the narrow cobbled streets, anyone who has strolled through Paris will get a familiar feeling, seeing the architecture, streets and cafes all around. Walking through the Macca-Villacrosse Passage, a covered arcaded street in the Old Town, or past their Arc de Triomphe and Kretzulescu Palace, built in French Renaissance style, you’ll find yourself reminded of the City of Lights. However, what isn’t reminiscent of Paris are the darker undertones of the city; the somewhat somber and depressed atmosphere that the fall of communism left in its wake. Bucharest is a unique and beautiful city, and definitely worth seeing for many reasons; whether you’re interested in recent history, medieval history, churches, art or simply want to have good time in the Old Town bars.

I visited Romania in the winter, in the end of January, when the streets were lined with snow and the skies were grey as slate. The days were cold and the nights were colder, but made all the better by the hot mulled wine they sell in carts on the streets. I’m sure I would have seen a much different city if I had visited in the spring or the summer, a city full of blooming flowers, greenery and a vibrant atmosphere. However, for a city like Bucharest, the winter gives the city such a stark beauty. Bucharest is beautiful and its people are fun, but there is an underlying impression that can be somber, and at times sad. You might not see or feel this part of Bucharest if you visit while the sunshine and flowers are there to distract you from it; but the black and white of winter lays the city bare.

Communism was tough on Romania, and when it fell, it fell bloody. Their communist dictator, Nicolae Ceauşescu, was brutal and times were hard all over Romania. You can still see the remains of communism around the city, the most obvious and massive reminder of this dark period being the Palace of Parliament. This building can be seen from space, is the heaviest building in the world, and the largest administrative building in the world. It is a massive representation of communism, commissioned by Ceauşescu as a symbol of his power and might, and it was built on the backs of the people. To make room for this monstrosity people were forced from their homes overnight, and to build it they used forced labor. Nothing about this building is beautiful to me, but it is impressive in an ominous and regrettable way; the walls and floors are made of Romanian marble, the chandeliers of crystal, the carpets and curtains were painstakingly handmade and the embroidery on the fabrics done in gold and silver. There was no expense spared in the building of what was to be Ceauşescu’s Palace, and yet it stands today as a big, empty, cold reminder. There are not enough staff, artworks, or events to fill the Palace. Walking through the halls one feels as though they’re walking through a skeleton of another time. The walls are not adorned, because there aren’t enough things to fill them with, and the rooms are stark and empty. Only a few lights are turned on, because they cannot afford to pay the bills to light the whole Palace, and the only people you pass in the halls are the tour groups walking through. Even going through the security to get into the building is an unhappy ordeal. Dour faced security guards make you stand and wait in a line while they come take your passport and search you. Not a smile in the place. Aside from the Palace of Parliament, there are several other places around the city that you’ll see the mark of communism, if you’re interested enough to look. You can visit the former residence of the Ceauşescu family, and see the opulence with which they lived, far removed from the depression beyond the walls. You can visit memorials and the Communist Heroes Mausoleum, a hauntingly beautiful and impressive monument to Communism. On your walk through the city you’ll no doubt end up at Revolution Square, where the people started their revolution against Ceauşescu during a speech in 1989. This place was the site of the end of the communist era; the speech that was meant to put down recent revolts in other areas of the country ended in chaos and rioting and resulted in the execution of Ceauşescu and his wife.

Communism ended violently in Romania, and I think that perhaps this is part of the difference between the atmosphere in this city, versus in others. Both Ceauşescu’s reign and his end was brutal and tough on the country, and it is still recovering from the trauma. People still remember the era and the violent end to it, and it leaves a mark on the city. You’ll meet people in Bucharest, whether they’re taxi drivers, tour guides or hotel staff, and you’ll hear some curse the whole communist era, but you’ll also hear people say that times were better for their families under the regime. You’ll see the good and the bad side of communism if you get a chance to talk with locals, and the opinions will no doubt be varied.

However, communism isn’t the only part of history that holds people’s interest in Bucharest. Bucharest was first used as a fort and residence for Vlad the Impaler, also known as Vlad III of Wallachia. While he is now known to people around the world as the inspiration for Dracula, he is known to many Romanians as one of their greatest rulers. He may have had a reputation for violence and tyranny at times, but he fought for the Romanian independence from the Ottoman Empire. Regardless of whether he was a patriotic hero or a cruel tyrant, he is certainly still a huge draw for tourists coming to Romania. While wandering through the Old Town you can see the remains of the Old Princely Court, or Curtea Veche as it is called in Romanian, where Vlad III used to live. This fort, or residence, was necessary for Vlad to watch the southern border with the Ottomans, as his home would have been in northern Romania; but because of this choice of location for his fortress and princely court, the city eventually built up around it, with this court in the center of it, in what we now call the Old Town.

Bucharest is full of incredible old palaces, museums and churches. You can see how Romanian peasants might have lived in the outdoor Peasants Museum, and the history of the area in the National Museum of Romanian history. You can see both classical and modern arts in a variety of museums. You should take some time to see the very unique and characteristic Romanian Orthodox churches, with their tall pointy spires jutting into the sky, as well as old monasteries like Stavropoleos, Antim and the slightly further afield Snagov Monastery, which is said to be the final resting place for Vlad III. In the old town you’ll find good traditional food, at restaurants that have been around for ages. You’ll also find an abundance of fun bars in old buildings and have a chance to try the national drink, palincă, which is made of fermented plums. If you’re not a fan of palincă, there is good wine and beer to be had, and if you’re there in the winter months, be sure to have some mulled wine. Of course you can also find nice modern restaurants outside of the Old Town, and brand new rooftop bars. The people that I came across during my time in Bucharest were friendly, helpful, and the majority spoke English (and potentially French or Italian). And while there is that subdued tone to the city and the people that I mentioned before, it is more of a general feeling, rather than characteristic of interactions with individual people, who for the most part were fun and interesting people. I loved Bucharest, and absolutely feel that I gained an entirely unique impression of the city by travelling in the winter. Despite the bitter cold, and the dark skies, I think it is a great time to visit if you want to see another side of the city. I can’t wait to see how much it changes in the spring or summer, and definitely intend to revisit this beautiful city to find out. 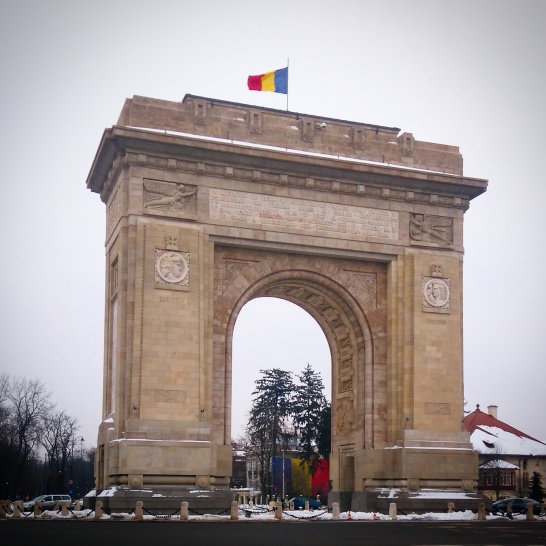